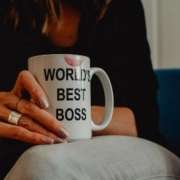 An office is supposed to bring employees closer together. Instead, it leads to cleavage. For some it’s a blessing, restoring borders between private- and workplaces; socializing with colleagues in real life again. But for others, it’s nothing but wasted time on commute, the loss of flexibility and self-determination. Many factors argue for or against change. The truth is, executives play the biggest role in it.

Messaging service Slack regularly conducts surveys about the future of work. A survey from October 2020 concluded that executives much rather prefer to return to the office than other employees*. From the executives, 75% say they would like to return to their beloved office at least three days a week. Whereas only 34% of “non-executives” would consider such a work week a good idea.

The discussion sparks flames in many companies. Early last year, Apple employees wrote an open letter to Tim Cook. In it, they clearly opposed the assumptions that a return to a normal office life was desirable: “… We feel there is a disconnect in the leadership team’s thinking about location-independent and location-flexible work and the experiences of many employees* at Apple. …”

Detractors claim, there are three logical explanations: the cynical, the logical and the unconscious. We would like to take a closer look and offer ways to solve this biased attitude.

Cynical arguments for the office

Executives value the status an office brings. They sit in nicer rooms, with better workstations, with a nice sign that kindly indicates, “Someone important is sitting here.” Access is politely but possibly closely guarded. When they walk through the office, it feels like an ego walk. In reality, it is a spying act. Which person spends more time in the coffee kitchen than in front of their screen? Who is a possible troublemaker, who is the busy bee? In the virtual world, these control and status mechanisms are “unfortunately” less effective. Everyone has a zoom tile exactly the same size. No one can tell who is shutting down the PC properly at the end of work. Thinking about employees using their paid time for fun outside? How far have we come!

A logical comparison for and against the shared office

Executives know that face-to-face interactions are better for the community they lead. The head of JPMorgan, Jamie Dimon even goes a step further. He claims that working from home, “doesn’t work for people who want to get things done, it doesn’t work for corporate culture, it doesn’t work for the generation of ideas. …” Ken Griffin, chief executive of hedge fund Citadel, even warns young people about working from the comfort of their home: “It’s incredibly difficult to get the leadership and interpersonal experiences you need to advance your career in a work-from-home environment.”

But employees seem to have taken a liking to remote work. A survey conducted in March by Morning Consult found that 87% of respondents who worked remotely during the pandemic plan to do so at least one day a week after normality returns. So the desire of many workers remain, even in a post-Covid work world. The desire for flexible work options is here to stay.

The concerns of many managers are quite justified. Virtual work risks entrenching silos. People are more likely to spend their time with colleagues they already know. Deep relationships are harder to forge with a slow Internet connection. Corporate culture is easier to absorb in real interaction. Even telecommuting advocates make time for physical meetings. “Digital first doesn’t mean you’re never there in person,” says Brian Elliott, who researches the future of work at Slack.

But the benefits of a real office are all too often overestimated. The Allen Curve, formulated in the 1970s, shows how the frequency of communication decreases the farther apart colleagues* sit from each other. This almost nostalgic hypothesis is still valid today. No gap is greater than that between employees from different locations. The disadvantages of digital remote work can be negated with a few simple methods, processes and solutions. Collaboration needs to be rethought and reimagined: Rituals, routines and software make it possible to combine the best of both worlds.

More than 8,600 recipients are already getting the latest HR trends, current HR & work topics, as well as news and best practices from teamazing. Subscribe now!

What is Business Resilience?